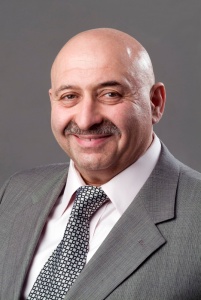 Dr. Farber is an internationally known and respected professional with more than 40 years of experience. A top professional, Dr. Farber devoted himself to creating a new approach in education based on a strong scientific-mathematical foundation: a unique proprietary patenting teaching object oriented method, based on patterns and images; a unified physics education system and decision algorithms for solving logic problems. Students who took his classes and digested these methods drastically improved their analytical-thinking skills and reached top elite schools and universities as a result. He has trained 37 Ph.D.s and Dr. Sci students in biomedical sciences, as well as thousands of students worldwide in mathematics and science. Many of his former students work all over the world as scientists, heads of laboratories, heads of departments and entrepreneurs, using advanced methods and algorithms of thinking.

In addition to his novel education approach, Dr. Farber has been developing scientific and medical inventions and discoveries, including self-adjusted and self-organized dynamical systems in many areas of his research starting from 1971 in semiconductors; dynamic layered systems in 1973; and dynamic multi axial vehicles in 1974. He created the world’s first group of self-adjusted dynamical mechanisms for Bioengineering in 1979, as well as a self-adjusted dynamical rheological elements based on magnetic liquid for prosthetics and for training devices in 1983. Starting from 1984, he published development forecasts for prosthetics and orthotics based on The Laws of System Evolution, which was used for creating a line of pioneer prosthetics and orthotics design. Being the Director of Science at the Central Research Institute of Prosthetics, he made the next logical step when he applied this approach of self-adjusted and self-organized dynamical systems for development in different aspects of the medical field. He and his associates started research in self-adjusted and self-organized dynamical drugs in 1995. As a result, a new large group was discovered– quasi-living, self-adjusted, self-organizing dynamic medicinal and diagnostic medicines, which represents a revolutionary jump from medicines’ static to dynamic drugs with variable structure and synergy. These drugs system have the ability to adjust to the body of each individual, to adapt to its system of receptors. Accordingly, the effectiveness of such drugs is increasing, and the action spectrum extends substantially. The implementation of this approach shows great results. His group continues to research dynamic anti-cancer drugs, synergistic quasi-living antibiotics, anti atherosclerotic drugs, antihypertensive drugs, medicines for Alzheimer’s disease treatment, for multiple sclerosis and diabetes, pain killer medications, cosmetology, cancer and atherosclerosis diagnostics.

After attaining a strong background and receiving a Postdoctoral Degree in Bioengineering and Applied Mathematics at the Central Research Institute of Prosthetics and Orthotics, Dr. Boris Farber received a Ph.D. in Robotics at the University of Information Technologies, Radio Engineering and Electronics (Moscow, 1987) as well as a Ph.D. in Biomedical Engineering at the Central Research Institute of Prosthetics and Orthotics (Moscow, 1987). He received his Dr.Sci. Degree (a ‘higher doctorate’ awarded in recognition of a substantial and sustained contribution to scientific knowledge) in Bioengineering and Management of Biological and Medical Systems at Peter the Great Polytechnic University (St. Petersburg, 1992). Dr. Farber then received a Professor Diploma in Biomechanics (Moscow, 1994).

Dr. Farber worked as a Scientist, Chair of Department of Artificial Limbs and as a Director of Science at the Central Research Institute of Prosthetics, the largest research institute of prosthetics in the world, from 1981-1995. The first myoelectric prosthesis hand in the world was created at the Institute, the license for this invention was sold to main developed countries, and the Institute received the Order of the Red Banner, one of the highest rewards from the government. He has been the founder and CEO of a few corporations: InvaPomosh, Inc. in 1989; Technological Industry of Prosthetics and Orthotics, Inc. in 1990; Ortho-Cosmos Inc. in 1991; Ecolotex, Inc. in 1993; Patterns Image Corporation Inc. in 2003; Farber’s Center for Academic Success, Inc. in 2005; American Medical Technologies Inc. in 2005; and Noigel LLC in 2010.

He has been the founder and editor-in-chief of the journal “Biomechanics and Prosthetics”, editor of the journal “Prosthetics and Orthotics”,  editor of the journal “Annals of Mechnikov Institute;” Vice President of the Russian Biomechanical Society; Vice Coordinator of a Branch of Russian Prosthetics and Orthotics Industry- a network that includes many institutes, plants and factories. He has created the industry’s first Doctors’ and Ph.D’s Thesis committee in “Biomechanics” and was Deputy Chairman of the Board of doctoral theses. He has made hundreds of presentations and publications at International Congresses in the USA, Australia, Belgium, Bulgaria, Canada, China, England, France, Germany, Greece, Holland, Italy, Japan, Russia, Scotland, Sweden, Turkey, United Arab Emirates, Ukraine and Yugoslavia.

Dr. Farber has been working in the overlapping of many branches of knowledge, implementing a broad vision of a system. He is the author of fundamental works in bioengineering and biotechnology, mathematical modeling, prosthetics, orthotics, biomechanics, bionics, movement control, kinesiology, electro-stimulation, scoliosis, myoelectric control, ergonomics, rocket-space industry, technologies for post-stroke and post-heart attack treatments, artificial intelligence in expert systems, cancer and atherosclerosis diagnostics, pharmacological biotechnology and nanotechnology, and many more.

Based on this strong, diverse foundation, TRIZ (the theory of inventive problem solving), the laws of system evolution, system vision, and an international patent law education, he is credited with more than 1,000 inventions, scientific articles and books in the aforementioned areas. His four books titled “Theoretical Aspects of Motion Control and Electro-stimulation” became bestsellers for professionals in this domain. He has participated in designing a unique software: Expert Systems for Biomechanical Measurement and Prosthetics and Orthotics Prescription, based on Artificial Intelligence; Interactive Anthropomorphic Models with Kelvin–Voigt viscoelastic elements; and Problem Formulator and Directed Evolution for inventive problem-solving for medical technologies. His pioneer magneto rheological fluid appliances are implemented in a new generation of computer control prosthetics and muscle training machine based on myoelectric control.  His inventions attained six gold and one silver awards during the World Exhibition of Inventions in Brussels and have been produced in the space–rocket industry to date. The inventions have helped hundreds of thousands of patients in rehabilitation and improved their lifestyle. Some of his inventions have been used not only on Earth for patient rehabilitation after strokes, but also in space for spacemen in spaceships as well as for the orbital space station.

He was named an Honorary Recipient of the “Honored Inventor of Russian Federation” in 1993, the highest prize that may be issued to inventors by the Russian government. He was nominated as Professor of the Year (New York, 2010); Scientist of the Year (New York, 2011); Member of The Top Executive Club, 2016; VIP Person, 2016; Professional of the Year by Worldwide Branding for his impact and contributions to the field of Education(Object-Oriented Patterns and Images Method), and R&D in: Applied Mathematics, Bioengineering, Bio- and Nano-Technologies; dynamic drug design based on quasi-living, self-organizing dynamic medicinal and diagnostic medicine with variable structure and synergy. 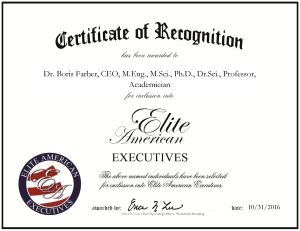